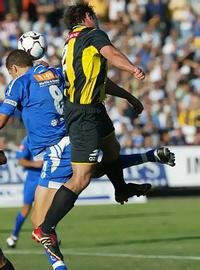 My father once said,

“If you tell the truth, the world will open up to you.”

My father Markos played soccer professionally in Greece and Australia and was my boyhood idol, correction, still is my idol.

If I were to describe myself as a player now, it would sound something like this. “I’m the cross between the greatest player never to make it, with the older I get the better I was.”

The merry go round began at a very young age, which included Cricket, Tennis and Soccer. Tennis was dropped at a young age because it clashed with Cricket.

I have the record for the youngest player ever to play Senior District Cricket for Carlton at the age of 14. (not sure if this record still stands, but I’m claiming it.)

Played my first senior game for Heidelberg United at the age of 16, (thanks Gary Cole) in what was called the NSL back then. The league is now referred to as the A-League.

At the age of 16 I managed to break my father’s heart when I chose Soccer over Cricket. My father after building a cricket pitch (nets included) in the backyard and after throwing what seemed to be a million deliveries was left crushed when the NSL decided to play in the summer. It was always going to be soccer.

Soccer has been good to me and I’ve experienced some dizzy highs with the corresponding lows. Managed to travel the world with various teams and represented my state for 6 years.

At the age of 22 I trialled with Southampton FC only to return to Melbourne to play for the Collingwood Warriors. Spent some time at the Australian Institute of Sports with Canberra Cosmos and finished my playing days with the club where it all began, Heidelberg United. Chronic knee problems ended my career at the age of 30.

10 Things about me, drum roll please

I’m very righteous and opinionated about what I do and say. Some call me a troublemaker.

I’m an old soul it seems, at least that’s what I’ve been told.

I have a really good (selective) memory about some things. Often I can recall facts and formulas from my University days and sometimes forget what I did an hour ago.

I’m interested in the truth, talent and the quest to be number one. I believe in passion that gets mistaken for anger and strongly believe the world game, yes soccer, will inevitably save the world.

I’ve been in life threatening situations more than once and have spent 8 hours in intensive care.

My sense of humour ranges from silly to cynical and at times inappropriate, often pissing myself at things that nobody else finds funny. If I had my way, I’d be driving a solid gold Aston Martin to my diamond studded mansion on the beach, where supermodels would chant my name as I approached. If you’re laughing, great, if not, I’m only joking.

I’m a wannabe writer, philosopher and an aspiring philanthropist.

I’m a bit of a control freak (put that down), super competitive (wanna bet) and most would agree that I’m stubborn (what do they know).

I stir the pot and love to think outside the box (lateral thinking). How else would I explain my craziness?

I seem to pay the bills, afford small luxuries and manage to save a bit for a rainy day.

But there is another side to a man; every now and then I get restless. “What Am I doing with my life?”

A couple of years ago I tried to answer that question. I said, “I’m going to build the biggest soccer community and help as many kids reach their full potential. I want to build a site that will eventually sponsor kids all over the world and help them become household names.

Will I succeed? Only time will tell.

“There is no substitute for love. If a man practices doing things for other people until it becomes so much a habit that he is unconscious of it, all the good forces of the universe line up behind him and whatever he undertakes to do.”

“May the winds of destiny blow you to the stars.”