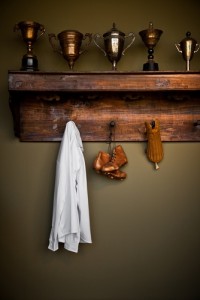 A few years ago, okay, closer to a decade ago, I was involved in a soccer match that will remain with me forever.

It was the second last match of the season before the finals. We needed to win both games to make the top 5 and a place in the finals.

All players were pumped but in the first half we played like a pack of amateurs. As we headed to the change rooms at half time, we were down 3-0 and I could see a couple of teammates arguing in front of me as the crowd started to voice their abuse.

The coach was swinging his arms like a traffic cop, yelling and kicking the near by drink bottles as he scribbled more plays on the whiteboard.

The game was so lopsided that I was dreading the second half and the abuse that comes with playing on the wings. The coach continued to demand commitment but my mind started to drift and I could envision myself on the end of year trip sipping on a drink.

All of a sudden a young, shy player stood up, spoke and pleaded with the team not to give up.

Love is not to be found in someone else, but in ourselves; we simply awaken it. But in order to do that, we need the other person. Eleven Minutes

I remember sitting there and putting myself in his shoes. I remember how the dressing room changed in a heartbeat. The young boys father had developed an aggressive form of cancer and was not given long to live.

We opened the half with a penalty that we converted in the first 5 minutes. From a misguided corner kick, the scoreboard changed to 3-2 within 10 minutes of the restart.

By this stage, the opposing coach took off a striker to strengthen up the defense. During the substitution the boy turned to me and said,

We were playing possessed and this was evident on the ground. The entire tone of the game had changed. While we were confused and scared in the first half, we were now prowling with a renewed sense of urgency that demanded victory at all costs.

You could see it in our eyes!

Each player was thinking.

Each player was demanding the ball instead of waiting or hiding.

You could see the change come over the other team as well.

While in the first half they were operating in a smooth, wordless flow, now they were tense, fighting with each other, complaining about the referee while their coach tried desperately to settle them down.

Who can say why a confused, dispirited team emerged from half time with a different attitude?

Perhaps we found a communal purpose in the embarrassment of being down by 3 goals.

Perhaps the coach made the required changes to enforce the new game plan amongst all the emotions.

Or maybe we won the game simply because of the pain we all felt in the boy’s voice. The pain that can only be felt when you love someone so much that everything else becomes irrelevant. Maybe it was a combination of all these factors that lifted the team.

But what I remember most vividly about the game was the young boy pleading with his teammates not to give up because he knew his father wouldn’t be around for the next season.

After years and much contemplation, I finally grasped that love is the answer. Love sustains life and is what remains after life.

Love isn’t an emotion but a mindset. As a mindset it is actually stronger than any emotion. Love is the most powerful motivator of all time.

Love moves very fast. It rushes us from heaven to hell in a matter of seconds

What happens to us when our world gets thrown upside down? When we lose our loved ones, home or even our minds. This kind of sadness percolates at a level far below a broken heart. No matter how much pain we suffer or how badly we’ve screwed up our lives, we can always find refuge in Love.

We had the game of our lives in the midst of personal agony because we were pushed by the greatest force in the world, LOVE.

When everything has been told and retold countless times, when the places I have visited, the things I have experienced, the steps I have taken are all transformed into distant memories, nothing will remain but pure love. The Zahir

Dedicated to everyone that has lost a loved one.