Why are so many young players ultraconservative, scared and so narrow in their future soccer goals? Have they already been manipulated and conditioned by today’s society? Could you, the parent be the problem?

Every single day, every time you attend training is another stepping stone towards the land of expanding opportunity. My question is, why are so many players setting their sights and dreams relatively low? Have you no ambition?

Where soccer is concerned, players are not measured in height, weight, age or skill levels. Although skill levels and technical ability are important, young players are measured by the size of their dreams.

If you ask a group of young players what they want out of soccer, chances are the majority of them will not know. 10% of them will want to improve and play for their local team. Fair enough.

The “superstars” or the kids that go on to play professionally represent less than 1% of a squad. What separates these kids from the rest of the millions playing the sport. Is it genes? Do they train harder? Maybe.

If I surveyed 100 random kids all participating in Soccer, I could easily separate the kids that potentially could go on to play in the big leagues. I’ll even up the ante and pick the select few without even watching them kick a ball. Before you yell out bullshit, let me explain. I’m not a psychic and I’m definitely not a magician. So what’s the secret?

To be completely honest with you, there’s no secret. Philosophers, psychologists and even Scientists have preached and offered some great advice over the years. This advice has been circulating for many years and calendars and history prove that it existed even before Christ. Anyone heard of Aristotle?

Getting back to my point, my selection or distinction amongst the 100 kids will be determined by a simple criteria. How many kids actually know who they are? Have you ever heard this saying,

Could it be any simpler? Who are you? Why are you here kicking a round ball into the net that resembles the old onion bag? Can anyone answer? Ask your kids tonight before they go to bed.

Over the years I’ve watched plenty of documentaries and interviews involving some of the greatest players. The common theme in all interviews was that these players knew exactly why they played soccer. They had a journey to fulfill. They had created a persona or a character for themselves that had a final destination. 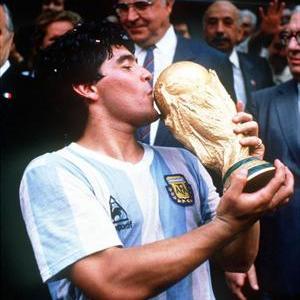 The one interview that still haunts me till this day is the interview that occurred in a small poverty stricken village in Buenos Aires. A shortish, dirty and weight challenged boy holding a round ball looked straight into the lens of the camera and said,

Apart from the cameraman nearly dropping his camera, this kid that lived in poverty and hadn’t been washed for weeks, knew who he was. He knew exactly why he carried a soccer ball around with him the same way a priest would carry a crucifix. He knew why that ball was more important to him than any other object in the world. He created a character that inevitably gave birth to Diego Armando Maradona, arguably the best soccer player of all time.

So the take home message is this

What will you or your kids be remembered for? The highest score on PlayStation. Create a character/identity (know thyself) and envision this person playing in the Premiership or in any other league. Could this be the difference? Let’s ask Diego.