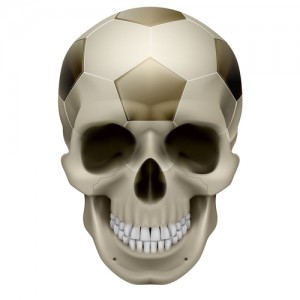 My philosophy, as a soccer parent is simple.

“Soccer is a metaphor for life”

Soccer offers the opportunity to learn in a team environment and allows children to cope with winning, losing and is one of many great workout programs.

But my philosophy fails to acknowledge something that haunts the majority of kids. I’ve referred to it as the struggle previously but will call it the bogey man for this post.

The Fear of Failure

When kids play with fear they tend to be scared and find refuge outside of the spotlight. My question has always been this, can these players improve by succumbing to fear?

Young kids need to take risks and have the confidence to stamp their authority on the game. They need to trust their ability and play with freedom. If they can manage this, significant improvements will follow and wait for it, they might start to enjoy the game.

At no stage should children make decisions based on fear.

-I play better in training than on match day.

-I’m worried what others think, especially my parents.

-I’m concentrating too much on my position as opposed to going for it.

-I need to win so I refuse to take any risks or make any mistakes.

-I try not to make any mistakes so my team mates can accept me.

Why would our children be thinking this way?

The Bogey Man comes in 5 Varieties

Fear of losing a match- Kids worry about losing and become anxious and consumed by the scoreboard.

Fear of letting others down- Kids are afraid to let their parents down, the coach and even their teammates. They feel the need to win to avoid being a disappointment.

Fear of not meeting expectations- for some strange reason kids think that others set high expectations of them. Usually the by-product of #1 and #2

Fear of embarrassment- Like getting caught with your pants down, they’re afraid of what others might think.

Last but not least, fear of rejection- Kids have a tendency to equate bad performances with losing friends and rejection.

Now for the million dollar question, how do you know if your child suffers from “fear of failure?”

Try these scenarios on for size

-Performs better at training and crumbles during match day.

-Pre game anxiety and stress usually resulting in silence, not wanting to play or that mysterious illness that pops up on match day.

-Performance dictates their mood and self esteem.

-Wants to win at all costs

-Worries too much about what others think.

-Worried about letting down the coach, teammates and even sitting on the bench.

If you want to help your kids succeed in soccer, you’ll need to change the perception of failure.

You read that right!

If in doubt, call in the experts.

Let’s start with a quote from the researches at the University of Poitiers in France.

“Children will perform best when they are told that frequent tries and even occasional failure are normal and important aspects of learning.”

The men in white coats have identified a vicious cycle that has plagued kid’s soccer for decades. Children will not seek new information or challenges with enthusiasm and interest because children are scared to fail and are reluctant to challenge themselves.

They also concluded that fear of failure produces an environment where children will not pursue difficult tasks which puts a stop to development, learning and inevitably erodes any self confidence left in the tank.

Children are more likely to succeed when parents and coaches reassure them that effort and sometimes failing is a requirement for success.

The following case study has been ripped out of the scientific journal of Experimental Psychology.

1st Experiment- 100 6th graders were divided into 2 groups. Both groups were given difficult anagram problems that couldn’t be solved.

A researcher then spoke to both groups about the difficulty of the problems. Group A was told that learning is difficult and failure is common. But with effort and practice they could progressively improve.

Children in Group B were simply quizzed on their approach to solve the anagrams.

Group A and Group B were then given a second series of tests.

Group A (learning is tough and that failure is a normal part of the process) performed significantly better than Group B.

Another experiment involved a reading comprehension test (same kids). The kids were also asked to judge their academic competence.

Group A were given this message before the test,

“Learning can be difficult and requires effort.”

Group B wasn’t given any feedback.

Study Results- Children in Group A not only performed better on the test but also reported fewer feelings of incompetence.

We need to tell our children that learning new things can be difficult and that learning takes time, effort and repeated practice. This message will boost confidence, reduce the fear of failure and ultimately improve performance.

Be a Role Model- Encourage your children to observe your progress in solving problems or trying to accomplish something new. Emphasise the effort that is required irrespective of the outcome.

Trust the Process- Forget about results or outcomes. Discuss the process of learning and discuss the small steps required to improve.

Resist the urge to help and make the problem/obstacle easier. Give your child a chance to complete the challenge on their own. Watch and praise effort.

Knowledge is Power- Look to teach when suitable. When your child is struggling to complete a new drill, ask about the experience and what they could try differently next time.

Are you the King of the Jungle?

From the animal kingdom, which animal best describes you?

For me, most soccer parents resemble that of an ostrich. While watching cartoons with my boys you’ve got to laugh at the ostrich.

Ostriches bury their heads in the sand when they get scared, confused or threatened.

What’s even funnier, they think they’re safe because they cannot see the danger.

How does this relate to you?

Because you fail to recognise the fear and the importance of failure.

Instead, when your child fails, loses or struggles you quickly bury your head in your hands without addressing the issues.

Stop being an ostrich and change the perception of fear before the bogey man comes knocking.

“Remembering that I’ll be dead soon is the most important tool I’ve ever encountered to help me make the big choices in life. Because almost everything-all external expectations, all pride, all fear of embarrassment or failure- these things just fall away in the face of death, leaving only what is truly important”-Steve Jobs