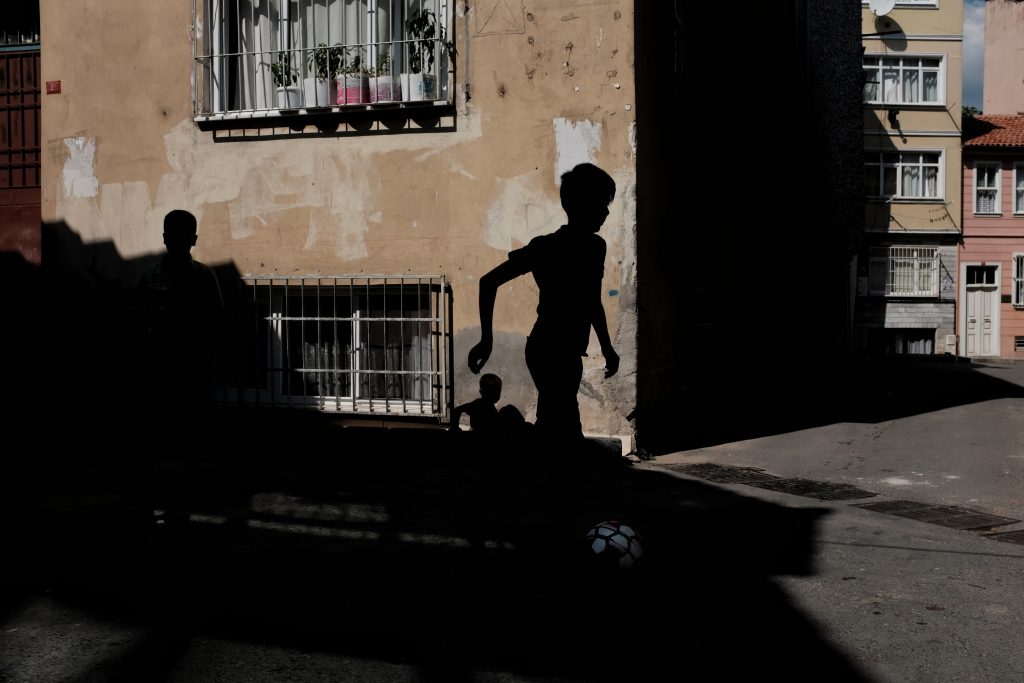 Fourteen years later and over 300 books on psychology, “Self-Image” is still the greatest discovery in psychological history.

In my opinion of course…

Cybernetics is the science of communications and automatic control systems in both machines and living things.

Paradigm is a distinct set of concepts and thought patterns.

Self-Image, the idea one has of one’s abilities, appearance and personality.

Are You Looking At Me?

You and I have an image of ourselves.

It’s basically how we see ourselves. I’m not referring to your reflection or the good looking person staring back at you from the mirror. That’s just your reflection of your physical being.

I’m talking about the image you hold inside your mind.

Your beliefs…your paradigms of who you are.

The multitude of ideas, beliefs and habits you entertain daily become part of your fabric…they slowly etch themselves into the side walls of your skull and filter your reality.

From a very young age you are given a set of beliefs which inevitably lead to habits and a very distinct lifestyle.

If at birth you were taken to Greece, chances are you would be speaking Greek and would adopt the Greek culture as your own. Still the same bundle of genetics, but the environment would shape and condition your beliefs and paradigms.

So let’s make the connection between the key terms defined above. When you combine self-image, cybernetics and paradigms together you unearth an interesting story. A story that is hidden in the depths of your subconscious.

Cybernetics and paradigms are both control systems and operate essentially on the same principle. Both maintain structure and a definite course of action that will not deviate from the target or the established thought pattern. In order to change, you must change your self-image which will inevitably change your paradigm.

Most people get stuck at a certain level. This happens at work, school and even on the green pastures. What’s heart breaking is watching young players battle with their confidence. The harder they try, the harder it gets.

Players with a fixed mindset will eventually reach their self-imposed limits. Speak to any soccer coach and he will quickly point out the best players. He will also point out the weak links and who potentially will not make the cut next year.

Even parents who have never touched a soccer ball can quickly come to the same conclusion.

Is this happening at your club?

Is your child exposed to the imaginary pecking order?

Does your coach allow this order to manifest in your team?

Are you guilty of comparing your child to other players?

Here’s a little secret I’ve been working on at the Academy with phenomenal success. 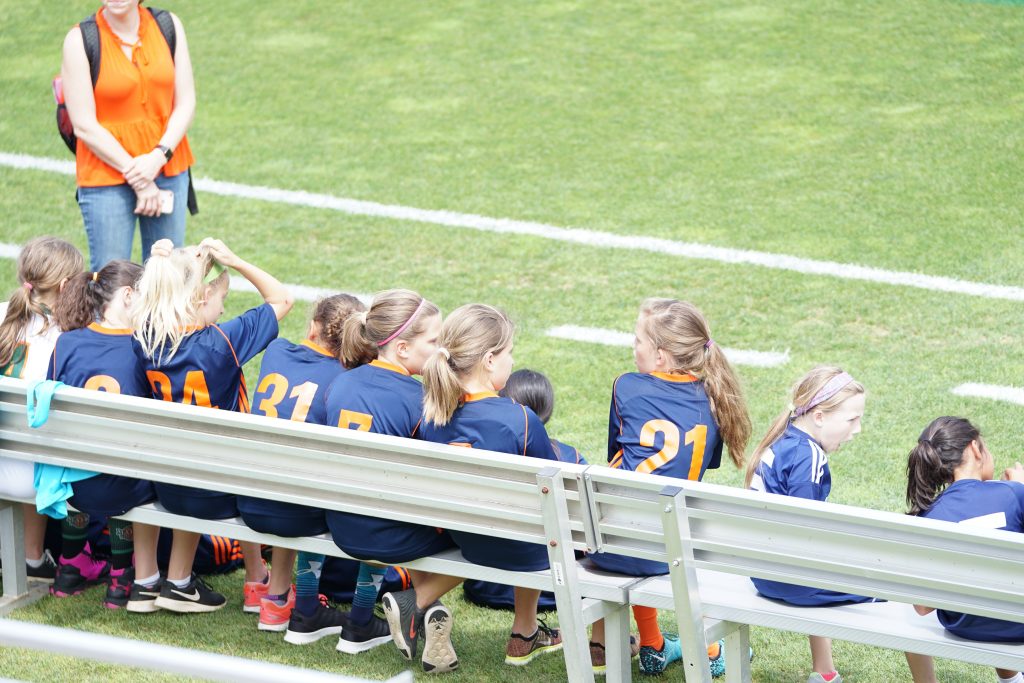 Establishing a pecking order in kid’s soccer results in one thing and one thing only.

…and I’m not talking about some psychedelic drawings or some repetitive colourful creation.

Before I give my secret away, let’s use an analogy instead of digging up some scientific jargon.

With winter nearly over, I’m guessing the ducted heating received a work out. Most houses will set their thermostat to 21 degrees. (Celsius- for those freaking out)

Once the house/ room reaches the desired temperature, the ducted heating unit switches off.

But what happens when your child leaves the front door open? Now the room temperature drops to 19 degrees C. The thermostat quickly identifies the deviation and quickly turns on the heating unit. The temperature begins to rise again.

The thermostat will stop again once the room temperature reaches 21C.

This is what we call a cybernetic mechanism.

The thermostat in your home is a cybernetic instrument.

Every person in the world is governed by a cybernetic mechanism…even your children.

Awareness is the Key

An airplane also has a cybernetic mechanism. Once the plane veers off course, the cybernetic system is activated and puts the plane back on course. This also happens automatically… the pilot doesn’t even have to touch the controls.

So what’s the connection?

One more example before we move on.

People trying to lose weight will immediately cut calories and start to exercise. In the process of starving themselves they will start to lose some weight.

Ever wondered why losing weight is easy but sustaining that weight loss is nearly impossible?

Could it be your self-image that makes you fat?

When a person loses weight without changing his/her self-image, any temporary loss will be regained. Remember… your self-image is a cybernetic instrument. It measures the deviation from the set goal and immediately corrects itself. The weight that was painfully lost is regained.

The weight that was lost will be found just like the thermostat and the automatic pilot software.

If you want to change, you’ve got to change your beliefs and your self-image. 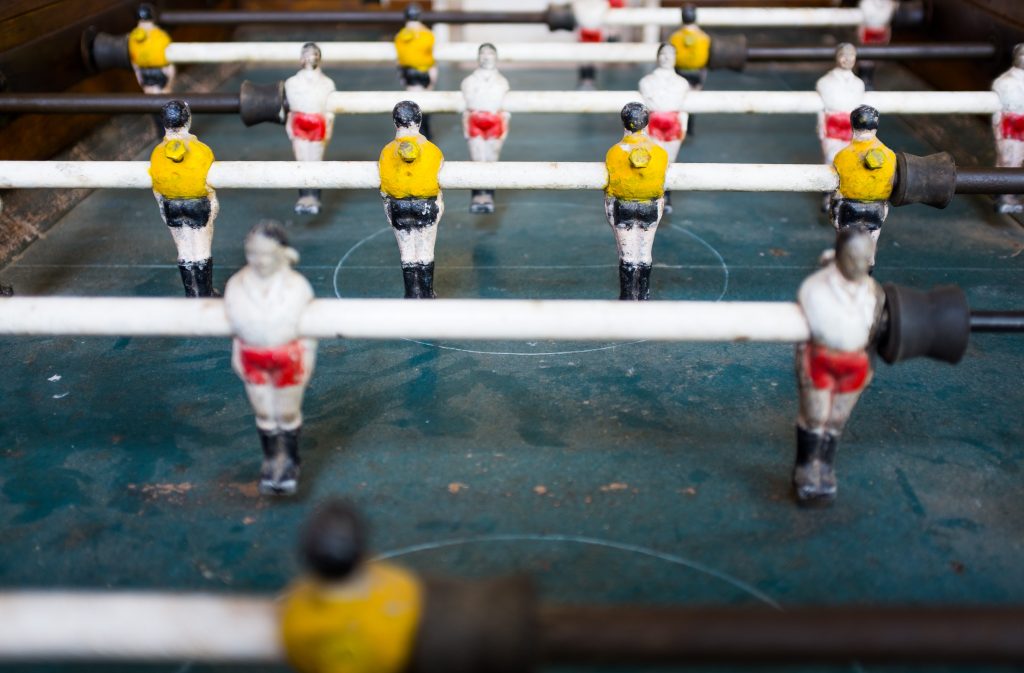 Your child’s self-image is a cybernetic instrument. Once you establish your team’s pecking order based on playing ability, you have instantly set a limit for every player.

What you have created…

What you are manifesting is a self-image for each and every player in your team.

Why is this a problem?

I’ve seen it time and time again…but know I understand why it happens.

Trains with an Academy…

After 40 academy sessions Player A has improved significantly. He has paid his dues with blood, sweat and tears.

Player A is eagerly awaiting the new season.

As soon as Player A returns to club soccer, he slowly but surely loses all his improvements and settles back into the middle of the pecking order.

The parents…start to scratch their head and ponder what is going on.

If you’ve been following you can clearly identify that the boy has not changed his self-image. All the gains and improvements have been lost because in his team, he is considered an average player. A player that makes up the numbers and will never make it as a professional.

Just like the thermostat, autopilot and the overweight person, the boy’s improvements are lost. If the player believes he’s an average player, he will inevitably become an average player irrespective of the training and time committed.

If the coach believes Player A is an average player, then the gauge is set to average. 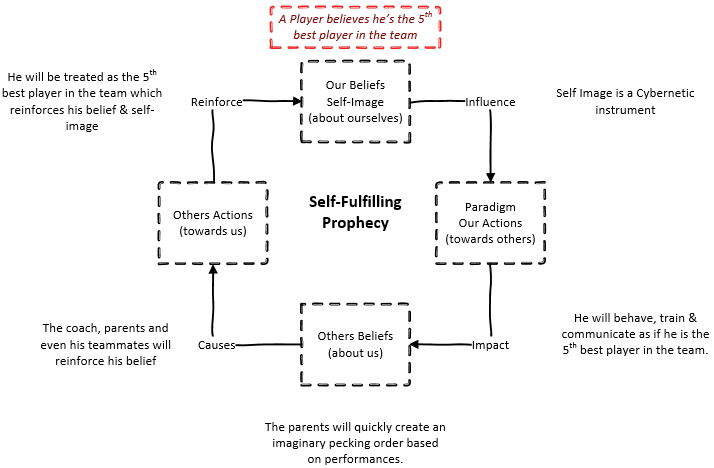 How to Change the Course

1-Assess your children honestly and never disclose or create a pecking order.

2-Always talk to your children and understand their thought patterns.

3-Avoid the compare and despair trap.

4-Surround your children with Love.

6-Talk and focus on the positives.

7-Remember that they are not the score line.

9-Never allow the coach to define your child.

The only way to influence your child is to first relate with them and help them raise their ambitions. Forget about imaginary pecking orders and look for small daily improvements. 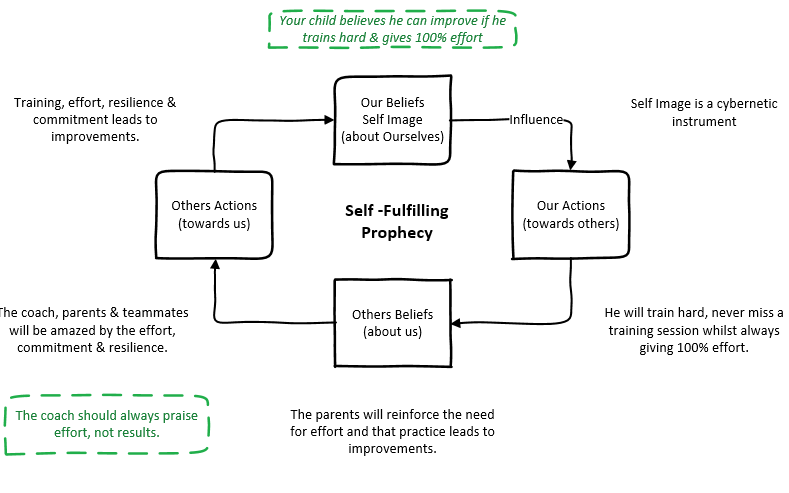 Something to Think About

If you’ve never played the game before, forget about coaching your child.

Understand their thoughts and identify the self-image they hold.

Kids soccer can be a cruel game and young children are usually the toughest “self” critics.

Watch the game through the lens of love and make sure to focus on their body language.

Talk to them and listen…

The most important aspect of youth soccer is hearing what isn’t said.